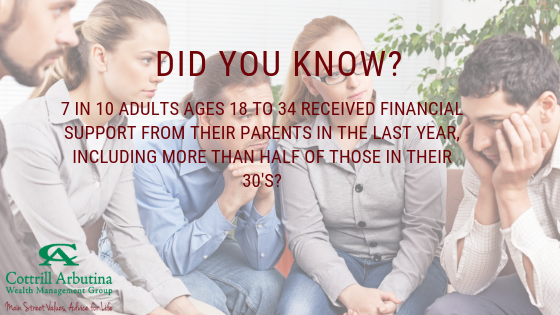 Most millennials define adulthood as being on their own financially, but the majority still depend on Mom and Dad for money, even in into 30s, according to a new Merrill Lynch/Age Wave survey given exclusively to USA TODAY.

Seven in 10 adults ages 18 to 34 received financial support from their parents in the last year, including more than half of those in their early 30s. Almost 3 in 5 millennials said they couldn’t afford their lifestyles without the support.

Despite that reliance, three-quarters say that financial independence from their parents is the measure of reaching adulthood.

“I think we need to acknowledge and understand that their finances (are) the No. 1 stresser in young adult lives,” said Lorna Sabbia, head of retirement and personal wealth solutions at Merrill Lynch. “If you talk to these adult children, they are not high-fiving each other.”

Mom and dad step in

Parents most often help foot the bill for everyday expenses, such as their adult children’s cell phone and service plan, and food and groceries. But they also support their children in bigger ways.

A quarter of all young adults have moved back home, while a third get help with rent or mortgage payments. Two in five who own homes got down payment money from their parents, according to the survey.

Four in five millennials don’t feel guilty, but rather grateful, for their parents’ support. Most young adults view it as a way to get ahead in their early years, but almost two-thirds say the help could make them too dependent the older they get.

The biggest reason for the dependence is the debt burden these young adults carry, Sabbia said. For 3 out of 5 of them, being debt-free is the key to financial success.

Four out of five early-adult households carry debt, usually education loans or credit card balances, according to the Survey of Consumer Finances. The average loan balance for those graduating with student debt is $36,888, or a $371 monthly payment over 10 years, according to Age Wave calculations.

For indebted adults, college is a big regret. More than a third of college graduates paying off student loans say the debt wasn’t worth it.

The average credit card balance is $3,700 among those with card debt, and more than half are struggling to pay it off, according to the Survey of Consumer Finances. One in four young adults withdrew early from their 401(k) – in many cases to cover credit card debt, the survey found.

“Any disruption in those savings has a ripple effect over time,” Sabbia said.

You can't make up for the lost investment growth from the withdrawn amount, even if it was a loan and you eventually pay it back. “That should be the last vehicle you go to,” she said.

The opinions voiced in this material are for general information only and are not intended to provide specific advice or recommendations for any individual.