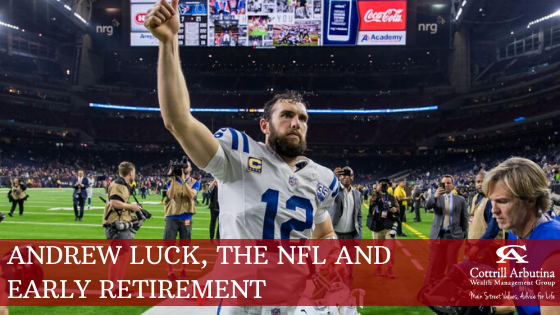 Indianapolis Colts quarterback Andrew Luck stunned the world when he announced his retirement from the National Football League at the age of 29.

But who doesn’t want to retire early? Unfortunately, if you’re like most people you won’t be able to. Here are some reasons that early retirement might elude you.

Some of the reasons involve how you handle money, but others focus on your mindset and expectations or on factors beyond your control.

For many, good money management means just paying bills on time and having a little bit extra left over at the end of the month. If early retirement is on your radar, you must master creating budget surpluses and you may need to overcome bad habits.

What you think you need to save may also be unrealistic. For example, if you’re 25 years old and hope to retire in 20 years, saving 10% of your pay each year probably won’t get you there. More likely you must save 25% or 30% of your pay – and even as much as 40% or 50%, depending on the retirement lifestyle you want.

Often your budget is to blame for your inability to save and your cost of living is simply too high to leave much room to sock away the kind of money for you to retire early.

If you’re serious, more than a few dreams may need to go for now: a single-family house in the suburbs, a late-model car, exotic vacations and dining out a few times a week. You may also need to postpone a premium cell phone plan, top-of-the-line cable TV or even pets.

Sometimes, certain basic expenses consume too much of your income. Housing is a major offender here: Americans are accustomed to owning (or dreaming of owning) the most expensive house possible.

Money you pour into your house – whether for the basic payment, utilities, repairs and maintenance or insurance – is often money you lose for early retirement.

Preparing for early retirement requires a distinct frame of mine, a large dose of mental discipline and possibly changing some attitudes.

Living the good life often leaves little room in a budget to prepare to start golden years early. Such preparation means rearranging your finances to prioritize saving and investing – simple as that.

Create a plan based primarily on your budget and commit to saving a disproportionate amount of your income for as long as your retirement goal takes. Planning, though, takes concentration: If side ventures easily distract you, your intentions may be good but you may never retire early.

Distractions can include making career changes every few years, occasional spending sprees to relieve stress or personal projects that drain your finances or reduce your ability to earn.

You have a vice

Once again: If you’re serious, more than a few things in your life have to go. Skiing every winter weekend can drain your money and so can a year-round commitment to your golf game. Not only can each cost you serious cash over a year but each also takes time from your ability to earn extra money.

You can’t spend six months working toward your goal and then declare victory. You must maintain the intensity between now and when you do retire early –

You don’t choose you

When Andrew Luck announced his retirement, he told the world that "I’ve come to the proverbial fork in the road. I made a vow to myself that if I ever did again, I would choose me."

Well, Andrew Luck kept his promise and chose himself. You should too.

*The opinions voiced in this material are for general information only and are not intended to provide specific advice or recommendations for any individual.